On Friday, a jury sentenced an impassive 21-year-old Dzhokhar Tsarnaev to death for the 2013 Boston Marathon bombings after months of deliberation in court. 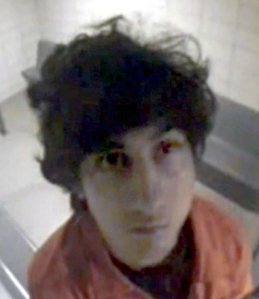 Tsarnaev after his initial arraignment in 2013.

This is the first time since 9/11 that the death penalty has successfully been brought against a terrorist. Tsarnaev and his brother Tamerlan were responsible for the two pressure-cooker bombs that caused an explosion during the Boston Marathon in 2013, taking the lives of four and injuring hundreds.

The parents of the incident’s youngest fatality, 8-year-old Martin Richard, watched the entire sentencing from the second row “stoically”. Since the federal government began seeking the death penalty for Tsarnaev, William and Denise Richard have avidly fought against it, noting that it would prolong a much-desired closure from a traumatizing day that both have already had to relive during their testimonies in court.

“We understand all too well the heinousness and brutality of the crimes committed,” the Richards wrote in the Boston Globe. “We know that the government has its reasons for seeking the death penalty, but the continued pursuit of that punishment could bring years of appeals and prolong reliving the most painful day of our lives. We hope our two remaining children do not have to grow up with the lingering, painful reminder of what the defendant took from them, which years of appeals would undoubtedly bring.”

In contrast, many survivors took to Twitter to express their support for the sentencing.

My heart is with our entire survivor community. I am thrilled with the verdict! #bostonstrong#bostonsafer

My mother and I think that NOW he will go away and we will be able to move on. Justice. In his own words, “an eye for an eye”.

William Campbell, whose daughter Krystle died in the explosions, expressed his content with the sentencing as well.

“I think the system worked and the jury did their job,” Campbell said to the Boston Globe. “I hope this decision will be a deterrent, to keep our young kids from going over to join ISIS, because they’ll know they’re going to pay for it.”

After attending the trial, Liz Norden, whose sons each lost a leg during the bombings, said she was pleased with the verdict, although there can never be true closure after such a heinous crime, the Boston Globe reports.

“There are no winners today, but I feel justice for my family,’’ Norden said. “I have to watch my two sons put on a leg every day. So I don’t know about closure. But I can tell you it feels like a weight has been pulled off my shoulders.’’

“I hope this verdict provides a small amount of closure to the survivors, families, and all impacted by the violent and tragic events surrounding the 2013 Boston Marathon,”Mayor Martin Walsh said in a statement. “We will forever remember and honor those who lost their lives and were affected by those senseless acts of violence on our city.”

The jury’s sentence will certainly be appealed by the defendant, which may bring to life the Richard family’s worst nightmare: this case, and Tsarnaev, may not die for quite some time. But for now, most victims can take peace in the fact that the justice system has done its job and rightfully convicted a criminal that disregards innocent lives.